An exclusive Gift Box that contains the essence of the Island and which is part of the limited edition collection "The Moors of Sicily" designed by Alice Valenti, an internationally renowned artist and custodian of the ancient decorative art of Sicilian carts.

Inside the metal casket are the two Sicilian Moors' cans and two precious hand-painted Sicilian ceramic Moor heads, created by the skilled hands of artisans following a tradition that has been handed down from father to son for a thousand years.

Each tin contains a special blend of freshly ground coffee for moka, expertly created by the Morettino master roasters according to the family recipe.

In the box also the Sicilian basil seeds that recall the legend of the Moors of Sicily. Plant the seeds inside the ceramic heads. Take care of them, your love will make them sprout and give life to a luxuriant and fragrant plant

A special gift box that preserves the traditions of Sicily. A blend of coffee with a Sicilian character, kept inside the precious tin of the "I Mori di Sicilia" collection, accompanied by two precious hand-painted Sicilian ceramic Moor heads, created by artisans according to a tradition that has been handed down for a thousand years from father to son.

The exclusive capsule collection tells the legend of the Moor and the Maiden, the two unfortunate lovers victims of passion and jealousy.

THE MORI OF SICILY

For Sicilians, coffee is a ritual, a symbol of sharing and conviviality, an authentic expression of the colors and flavors of our land.

The “Sicily Boutique Coffee - I Mori di Sicilia” collection is a tribute to the tradition of our island, its history and its scents.

The exclusive capsule collection tells the legend of the Moor and the Maiden, the two unfortunate lovers who are victims of passion and jealousy.

THE LEGEND OF "I MORI"

Around the year 1100, during the period of the domination of the Mori (the moors) in Sicily, a beautiful girl lived in the Kalsa district of Palermo, who spent her days taking care of the plants on her balcony. One day a young Moor (Il Moro) found himself passing by, who as soon as he saw her fell in love with her and decided that she would belong to her: she immediately entered the girl's house and declared her love.

The girl, fascinated by such ardor, immediately fell in love with the young Moro. Unfortunately, her happiness did not last long: she discovered that Il Moro already had a family waiting for him in the East.

Her heart broke and, blinded by her jealousy, the Maiden killed the Moor in his sleep and then cut off his head. She made a pot of it in which she planted some basil. Watered by her tears, the basil grew luxuriantly and that plant became the object of envy of the inhabitants of the neighborhood, who had specially built terracotta pots depicting Moorish heads.

Hence the custom in the balconies of all of Sicily to use the famous vases depicting the Moor and the Maiden to house beautiful plants and colorful flowers.

THE PROJECT SIGNED BY ALICE VALENTI

The limited edition collection is signed by Alice Valenti, painter, artisan and keeper of the ancient art of hand-decorating Sicilian carts. She is an internationally renowned artist, she has collaborated with design and fashion brands such as Smeg and Dolce & Gabbana.

The tins depict the two lovers, the Maiden and the Moor. Two subjects that the artist has interpreted for us in two colors, red for the lady and blue for the dark.

Painted in watercolor, the sumptuous faces of the two characters stand out against a delicate striped background that emphasizes the verticality of the tin, whose sobriety is interrupted by the richness of the lid with a typical "cartocci" motif. The surprising combination of tradition and modernity, the artist's stylistic signature, finds expression in the new Morettino Limited Edition tins.

THE TRADITION OF THE "I MORI"

The "Testa di Moro" are characteristic objects of the Sicilian tradition. Two hand-painted ceramic vases depicting the faces of a young Moor and a beautiful girl.

In Sicily for hundreds of years the Moro heads ("Graste" in Sicilian dialect) have adorned the balconies of the island's streets and its lush gardens.

The Gift Box contains a precious ceramic Moor's Heads depicting Il Moro, handcrafted by Sicilian artisans. The majesty of the ceramic head is completed by the enamel firing, which enhances the details.

THE BLEND OF FAMILY

Inside each tin is a special blend of freshly ground coffee, roasted by Morettino master roasters according to the family recipe. It is an intense blend, with a typically Mediterranean character, a symbol of the union of different flavors and cultures, like the union between the two unfortunate lovers.

THE RITAUL OF COFFEE WITH MOCHA

We carry on with passion the ancient ritual of coffee prepared according to tradition with Moka.

An invitation to rediscover the slowness, the value of a good coffee prepared at the right time and savored sip after sip. Ancient gestures, which know of family and home.

Inside the box you will find the elegant Moka Silver two cups in stainless steel, totally Made in Italy and signed by Morettino.

GROW THE SEEDS OF TRADITION

Inside the Gift Box the Sicilian basil seeds that recall the legend of the Moors of Sicily. Plant the seeds inside the ceramic heads. Take care of them, your love will make them sprout and give life to a luxuriant and fragrant plant, which you can display on your balcony while keeping the Sicilian tradition alive.

Write Your Own Review 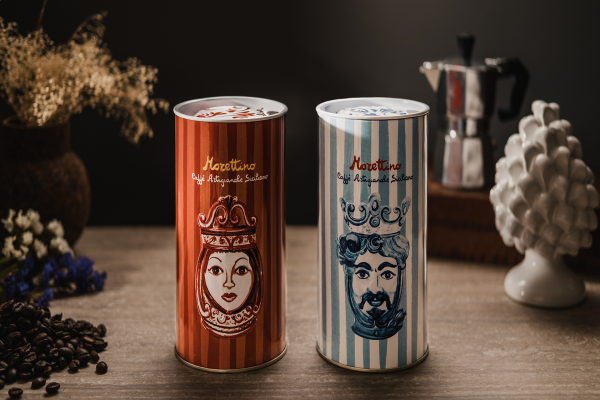